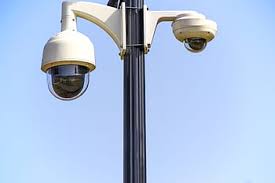 San Diegans likely catch sight of the subtle boxes attached to streetlights around city streets. The small lenses capture the goings-on of the streets and sidewalks below. But how effective do streetlight cameras prove? And how does law enforcement utilize their data?

A report from NBC 7 Investigates uncovered a trove of information regarding statistics on the streetlight cameras. In the report, they studied the length of time between August 11, 2018, and October 28, 2019.

In those 14 months and change, they found San Diego police used footage from the surveillance cams a total of 175 times. The majority of that figure took place in downtown and the southeast sector of the city.

Police investigators utilized the footage most for homicides, accounting for 31 of the total number. Following the top offense, assault with a deadly weapon came second with 22 cases.

However, police used footage for a wide range of offenses. For example, they used camera recordings in 9 vandalism cases, as well as in 9 sexual assault cases.

City data indicates the use of camera footage proved critical in 58 of the total 175 cases. However, it also listed footage not helpful in 72.

Additionally, presumably to stave off concerns, Jordan explained law enforcement uses footage only in response to crime. “The San Diego Police Department uses this technology reactively, to recover evidence after a violent crime or serious collision have occurred,” he wrote in an email NBC 7 Investigates obtained.

However, not all feel entirely comfortable with the installation and use of streetlight cameras. Several councilmembers last year expressed concern over the lack of information provided prior to their implementation.

As lead attorney of San Diegans for Open Government, a public advocacy group, Briggs has filed a suit against the city for hiding information about the streetlight cameras.

Close Menu
Get a FREE Quote
×